Earlier this week I took some video footage at the lab whilst creating Hele-shaw cells with perspex. Things went a little differently from what I had planned ! – but I enjoyed the result and decided to turn it into a short experimental movie. The shapes and forms made me think of looking through a lens from both directions at the same time at the same set of objects – we could think of these objects as being on a microscopic or a macroscopic scale. I could see blood corpuscles, mucor, aliens, planets .. many things !

During my experiments at the Uni, I’ve been getting some curious ink effects, which I mentioned in a recent blog entry. It seemed that my ink would sometimes be reluctant to move when placed on or near a wall of perspex; despite being in flowing water. One side of the vertical ink, that which faced oncoming horizontal flow, would remain static (the other side would drift).

Now, thanks to my colleagues’ explanations, I have a better idea of what’s happening! It seems I encountered the boundary layer effect where the ink behaves differently near a bounding surface. Yesterday, I saw it again – this time using ink in an Ahlborn tank, placed directly on glass under a slow flow of water to create streams of colour moving towards and around a cylinder. The ink seemed to stick to the bottom for a while and then form nice streams as it joined the flow. Heavier inks worked better; the lighter ones floated away too quickly. 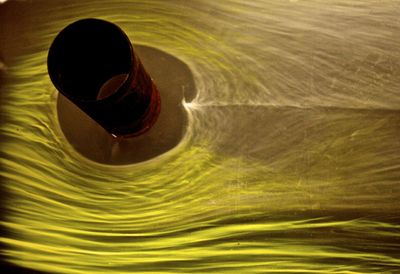 streams of ink around a cylinder

The ink did not touch the cylinder; instead it made a clear path around it. 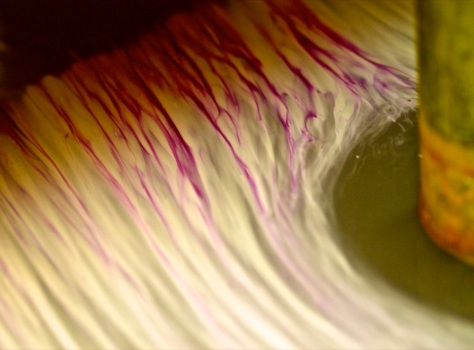 I also set up some patterns of flow illuminated from above by neon lighting. These gave some interesting abstract, but regular patterning. 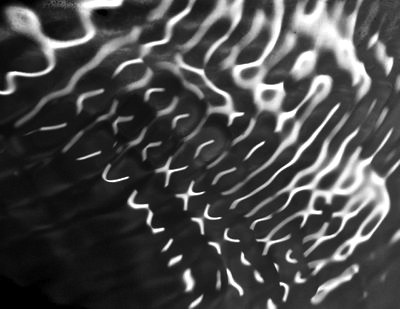 And here are some interesting patterns made after my experimenting, when the two perspex sheets were separated: 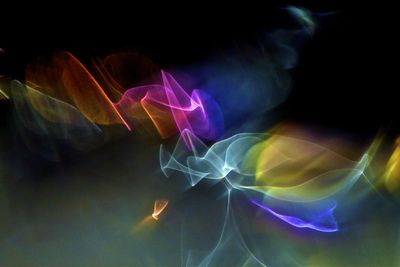 There are similarities of form between these pictures of light and glass, and the forms found in fluid flow, seen below and elsewhere on my site … a sense of movement is also common to both media. I hope one day to combine both approaches within my images – it will be quite a challenge!

I found this stormy sea view whilst doing my Hele-Shaw work in the Fluids Lab last week. The colours and forms reminded me of a little Cornish cove with a cave which I visited a while back:

Ink on perspex. Could be a Cornish cove with the tide flowing in fast.

Yesterday I used the flow visualization channel to create seascapes and bubble abstracts. It was fascinating to watch changing forms as vertical ink encountered lateral flow – would be worth videoing at some point. The two seascapes below were images of the lower part of the tank where things got a little more turbulent. The colours and textures reminded me a little of Caspar David Friedrich’s work. 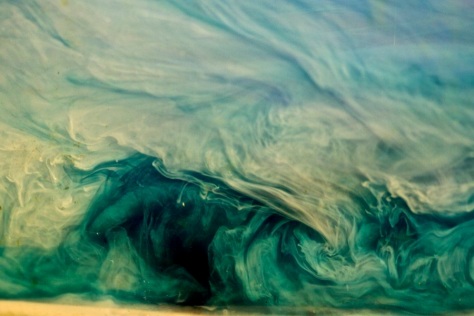 Horizontal streamlines of ink remained remarkably stable, but ink introduced vertically became caught in the sideways flow, producing sharp lines on the left sides and drifting on the right sides.

From this, I understood that I could make 3D images by dropping ink behind this relatively stable patterning to create new backgrounds. I also used bubbles to create narrow flow channels, and used the drip lines on the perspex as part of the design. 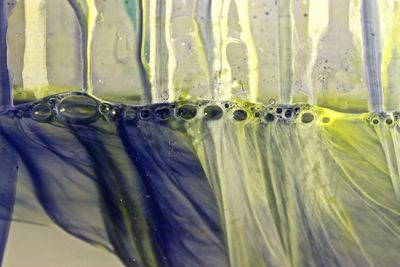 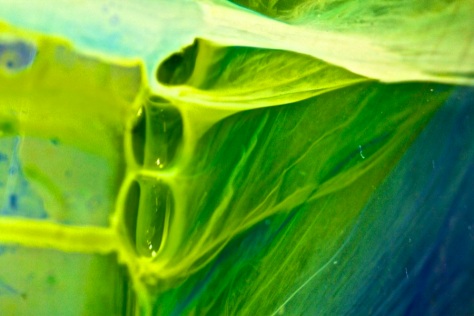 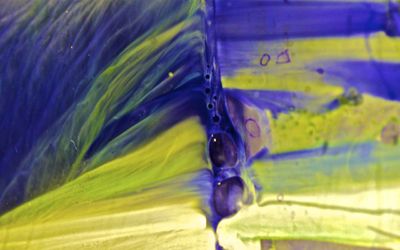 I also did more Hele-shaw work yesterday using my new perspex sheets which were great! Everything worked really well, and I was able to photograph complete forms in detail. Here are a couple of amoebas with bubbly vacuoles:

Yesterday I did some experimental work using Hele-Shaw flow. The experimental set-up involved perspex sheets with a narrow gap. I was trying to find out what worked best as regards types of fluid and the gap through which they slowly travelled. Now that I have sorted a few things out with my mockup, I can go ahead and have some perspex sheets prepared by the workshop. Meanwhile, here are some of the pictures I took yesterday. I was intrigued by the similarity between the textures and those of plant cells, as well as the plant-like shapes that these forms took. 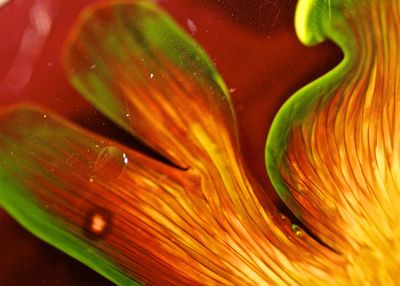 First time I’ve tried this kind of flow out; love the way it moves!

The image below was created from my work on flow visualization earlier this week.

Highly structured, constrained ink flow in the lower part of the picture gains freedom as it moves outward and along, like windblown cloud formations in a rapidly changing sky.

A really interesting and productive week for me, meeting new people at the University, talking to them about what I’m going to be doing, and trying new things out in the fluids lab. My sketch book is filling up with ideas!

Yesterday I tried out some of my inks in a flow visualization channel which I set up over the sink. The water was moving towards the right. On its surface I generated some aerated ink with a pipette. Gravity caused microchannels of ink to follow the pattern made by the bubble walls and drain downwards. These thin lines of ink then got swept along in the direction of the flow.

I was intrigued by the beautiful tessellations of the bubbles .. more to explore here! 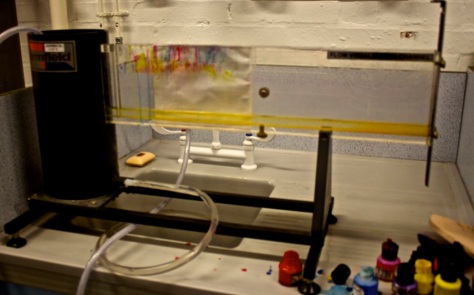